The easiest way to donate to local Native-led organizations with a track record of voter registration, election protection, and getting Native voters out to the polls to make sure that Native communities are heard in the democratic process! These groups also work on local community building, advocacy and issue organizing year-round, in addition to voter engagement.

100% of funds are re-granted directly to the groups.

Build long-term infrastructure that lasts beyond the next election. We fund organizations and local leaders that are in their communities year-round, not one-off campaigns that come and go each cycle.

The Native vote in 2020 – both urban and rural – will be pivotal in Arizona, Wisconsin, Minnesota, Michigan, Montana, Nevada, North Carolina and Colorado. The American Indian and Alaska Native population was 6.8 million in 2018 and expected to grow to 10 million by 2060, according to the U.S. Census Bureau. With a growing electorate in major swing states, investing in Native-led organizing is especially important in 2020 and beyond.

Native Peoples Action (NPA) is an Indigenous-led organization advocating for equitable access to education, healthcare, wellness and protection of native lands and communities. NPA leverages Alaska Native community networks of volunteers to provide guidance to connect native values with political candidates, policies and land management projects. Through these actions, NPA is unifying Indigenous communities to practice being civically engaged, including registering to vote. A recognized environmental all-Navajo organization based within the Navajo homeland. It’s empowering local and traditional people to organize, speak out and determine their own destinies. It’s educating and advocating for traditional teachings and providing a voice for all life in the Four Sacred Mountains. Among their victories on multiple issues, a key one is winning reform of the Radiation Exposure Compensation Act. 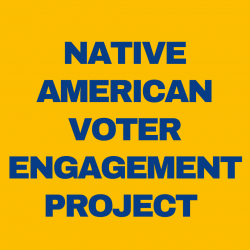 The Native American Voter Engagement Project at Instituto, led by Raina Roan of the Navajo Nation, aims to encourage Native organizations or leaders to engage in voter work in their communities. The project in partnership with MVP will award seed funding and capacity support to a cohort of organizations that provide plans that aim to increase Native vote turn out by 2% in the 2020 cycle. Great Plains Action Society (formerly Indigenous Iowa) is a collective of Indigenous organizers in the Great Plains of Turtle Island, situated between the Rocky Mountains and the Mississippi River and stretching from the Northern Tundra to the Gulf of Mexico. Great Plains Action Society is a Native led collective organizing for progressive indigenous civic engagement, base building and voter registration through mobilizing people to vote based on ecological and ancestral boundaries.

For the past ten years Bimi’ji 350, the native-run partner of MN 350, has led the fight to protect the water, land and people of Northern Mn from Line 3, a large tar sands pipeline that threatens treaty lands and the world’s only wild rice fields. For 2020, Bimi’ji 350 is engaging Native voters in Northern MN, Duluth and Minneapolis and plans to register 2000 new voters.

NAVA organizes Native American electorate to create and implement a civic agenda that will improve the quality of life for Native families in New Mexico. NAVA works on voter education, developing leadership in renewability and sustainability, protecting sacred sites, and ending predatory lending.

A powerful nationally-based Native-led organization that invests in young Native American leaders to spark culturally-based community change. It organizes a year-long leadership program that provides training, support, and resources to help young Native leaders create positive change in their communities. It is the only national program for Native leaders that holistically focus on both individual skills and community development.

A grassroots organization based on the Menominee Reservation working to revitalize their communities. It provides a platform for health and wellness by leading by example, celebrating the sacredness of life, and embracing their strengths as a First Nations People. Its leading powerful multigenerational initiatives including the Women’s Retreats, Community Art, Energy Sovereignty, and the Protectors of the Menominee River. The Native Organizers Alliance, a project of People’s Action, supports grassroots changemakers who advance the welfare of indigenous people by providing them resources, support, technical assistance, and networks. They aim to develop new organizers’ capacity within the movement. In addition to being active in the DAPL fight they were also involved in a successful voting rights case bringing early voting closer to tribes in Northern Nevada.